The Stone that Became a Frog

"Now, here I'll tell a story (worak). And there a man came. There he was out hunting. It was raining very hard. When it came, he was there on the prairie, and so he sat under a big rock. And then the Thunderbirds thundered mightily, and as he looked on earth, they made it (lightning) connected, and so the people ran away. And he got close to the big rock. The Thunderbirds struck it and made it come rolling down. They say that this stone was a big frog. That one saw the stone. At that time the stone was making itself that way."1 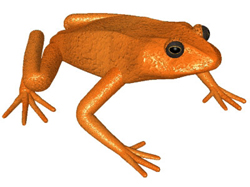 Commentary: The Thunderbirds thunder by looking, since the lightning emanates from their eyes. Apparently, by the expression, "they made it connected," he means that their lightning shots connected with earth. The man who was out hunting was originally under the rock to shield himself from the thunderstorm, but then he is later said to be close to it, but apparently no longer under it.

The frog, from its rapidly darting and very long tongue, can form something of a model of a lightning strike. It has a kind of inverted connection to things of the air, since it is most often observed eating flies and other flying insects. The frog is also similar to a thundercloud in virtue of its aquatic nature. Thunderbirds are said to "eat" what they strike, so that the lightning is rather like a long tongue that darts out swiftly at its object, an image very consonant with the way that frogs capture their own meals with their darting tongues. In addition, both clouds and amphibians are metamorphic. Furthermore, like thunderclouds, frogs have loud voices. Among the bizarre meteorological wonders is the occasional rain of frogs that may occurs in severe thunderstorms associated with tornadoes.

Comparative Material: In the mythology of the Yaqui of Mexico, it is Toad who steals fire from the God of Fire. The race of toads transfer the fire into sticks and stones so that "now men can make fire with a drill because the sticks have fire in them."2

Stories: mentioning frogs: Hare and the Dangerous Frog, The Two Boys, The Woman Who Became an Ant, Snowshoe Strings, Turtle's Warparty, Porcupine and His Brothers, Young Rogue's Magic; mentioning Thunderbirds: The Thunderbird, Waruǧábᵉra, How the Thunders Met the Nights, The Boy who was Captured by the Bad Thunderbirds, Traveler and the Thunderbird War, The Boulders of Devil's Lake, Thunderbird and White Horse, Bluehorn's Nephews, How the Hills and Valleys were Formed (vv. 1, 2), The Man who was a Reincarnated Thunderbird, The Thunder Charm, The Lost Blanket, The Twins Disobey Their Father, The Thunderbird Clan Origin Myth, Story of the Thunder Names, The Hawk Clan Origin Myth, Eagle Clan Origin Myth, Pigeon Clan Origins, Bird Clan Origin Myth, Adventures of Redhorn's Sons, Brave Man, Ocean Duck, Turtle's Warparty, The Daughter-in-Law's Jealousy, The Quail Hunter, Heną́ga and Star Girl, The Twins Join Redhorn's Warparty, Redhorn's Sons, The Dipper, The Race for the Chief's Daughter, Redhorn Contests the Giants, The Sons of Redhorn Find Their Father, The Warbundle of the Eight Generations, Medicine Rite Foundation Myth, Origin of the Hočąk Chief, The Spirit of Gambling, Wolf Clan Origin Myth, Black Otter's Warpath, Aračgéga's Blessings, Kunu's Warpath, The Orphan who was Blessed with a Horse, The Glory of the Morning, The Nightspirits Bless Čiwoit’éhiga, The Green Waterspirit of the Wisconsin Dells, A Waterspirit Blesses Mąnį́xete’ų́ga, Baldheaded Warclub Origin Myth, The Big Stone, Pete Dupeé and the Ghosts, Song to Earthmaker, The Origins of the Milky Way.